Mr. Zhou Xiaochuan’s 2nd rate cut in 4 months, likely will hurt China fatally and irreversibly: Both China’s house price and stock price are already much higher than international average (with similar income), and RMB off-shore’s about 2% lower valuation.  Lowing rate again will devalue RMB and will push more money to flow out and faster flow out. When an currency over-valued, more printing will accelerate, instead of slow-down, economic collapse.

With gigantic M2, 2x more debt on corporate sector than that of US, huge house bubble and huge local government debt, TopCools believes an recession which quickly damps the house price and currency, kills low efficient companies and transfer their customers to more efficient firms, can improve overall health of Chinese economy, are the best interest of China.

Recession has the positive effect of killing low efficient firms. Every western countries has experienced many recessions, but they always come out stronger. China’s continue path to paint 7% nominal growth by printing (BTW: China is the only country with GDP 7% while manufacture PMI at 50 and overall PMI at 51), will destitute China via wealth out-flow, and increase the scale of the damage of inevitable recession. What is the benefit of big number GDP if most of your rich/wealth have left China? We think Mr. Zhou made a fatal mistake. 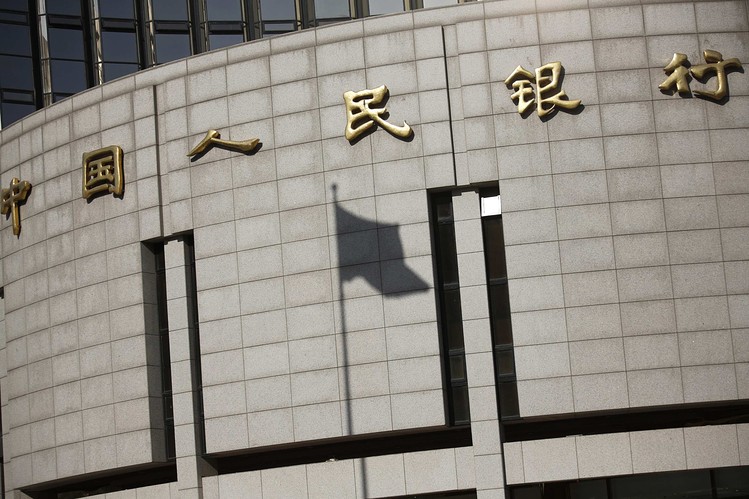 ENLARGE
The People’s Bank of China cut its benchmark interest rates for the second time in fourth months. The move is effective March 1. PHOTO:REUTERS
By
LINGLING WEI

BEIJING—China’s central bank cut interest rates for the second time in less than four months, in a fresh sign that the country’s leadership is becoming more aggressive in trying to arrest flagging economic growth.

The rate cut by the People’s Bank of China, announced Saturday, came sooner than some analysts and investors had expected and reflects growing worries over the world’s second-largest economy as it struggles with an array of ills: a slumping property market, more money being sent offshore and growing risks of falling prices that, in effect, are pushing up borrowing costs for businesses.

“Deflationary risk and the property market slowdown are two main reasons for the rate cut this time,” said a central bank official in an interview late Saturday.

The cut, effective Sunday, lowers by a quarter percentage point both the benchmark one-year loan rate, to 5.35%, and the one-year deposit rate, to 2.5%. In a statement accompanying the rate-cut announcement, the central bank singled out rising deflationary pressure as a trigger for the move, saying that plunging commodity prices world-wide “provided room” to spur growth by lowering interest rates.

The latest easing step followed a rate cut in November—the first such move in two years—and an across-the-board measure lowering the amount of money banks need to hold in reserve, thereby freeing up more funds for lending. Economists and officials said it shows that the Chinese leadership is increasingly shifting toward using big-bang measures to support growth, which has been decelerating in recent years and last year slipped to 7.4%, its slowest pace in nearly a quarter century.

China’s political elite gather in Beijing this coming week for the opening of the national legislature’s session, during which the government will introduce broad policy goals for the year and, many economists expect, set a lower growth target of 7%.

“Hitting their expected growth target of 7% this year will be a challenge,” said Mr. Shen. 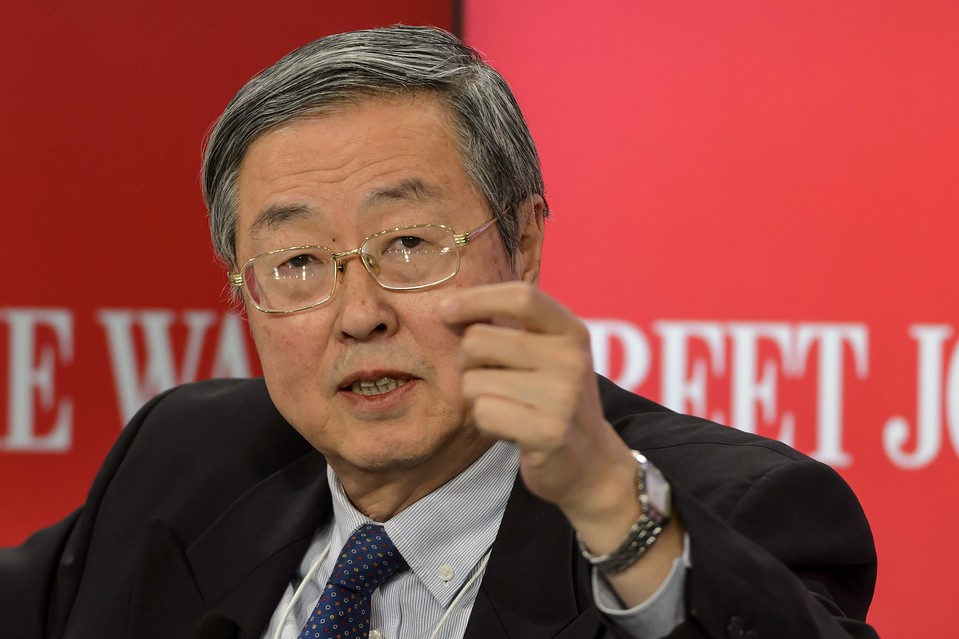 ENLARGE
The Bank of China, under Governor Zhou Xiaochuan, pictured above, is now acceding to demands from the Chinese leadership to reduce financing costs for businesses, according to officials and advisers to the bank. PHOTO: AGENCE FRANCE-PRESSE/GETTY IMAGES

A sharper slowdown could force the government to further open the credit spigot and increase big-ticket infrastructure spending, the economists and officials said. Such moves, however, entail risks, potentially adding to already high debt levels among companies and local governments and stalling plans to deleverage, reduce industrial overcapacity and force greater efficiencies on state companies.

For much of last year while the economy skittered, the central bank, under its longtime governor, Zhou Xiaochuan , insisted on targeted efforts rather than broader moves like rate cuts out of concern that broadly easing credit would worsen debt problems. But increasingly, as a personnel shuffling is sweeping through the central bank’s senior ranks, the central bank is acceding to demands from the Chinese leadership to reduce financing costs for businesses, according to officials and advisers to the bank.

Mr. Zhou himself is also expected to step down soon, according to officials at the central bank. At 67, he’s already passed the retirement age of 65 for senior Chinese officials. The Wall Street Journal reported in late September that Chinese leaders were discussing replacing Mr. Zhou amid disagreements over the direction of financial policy. 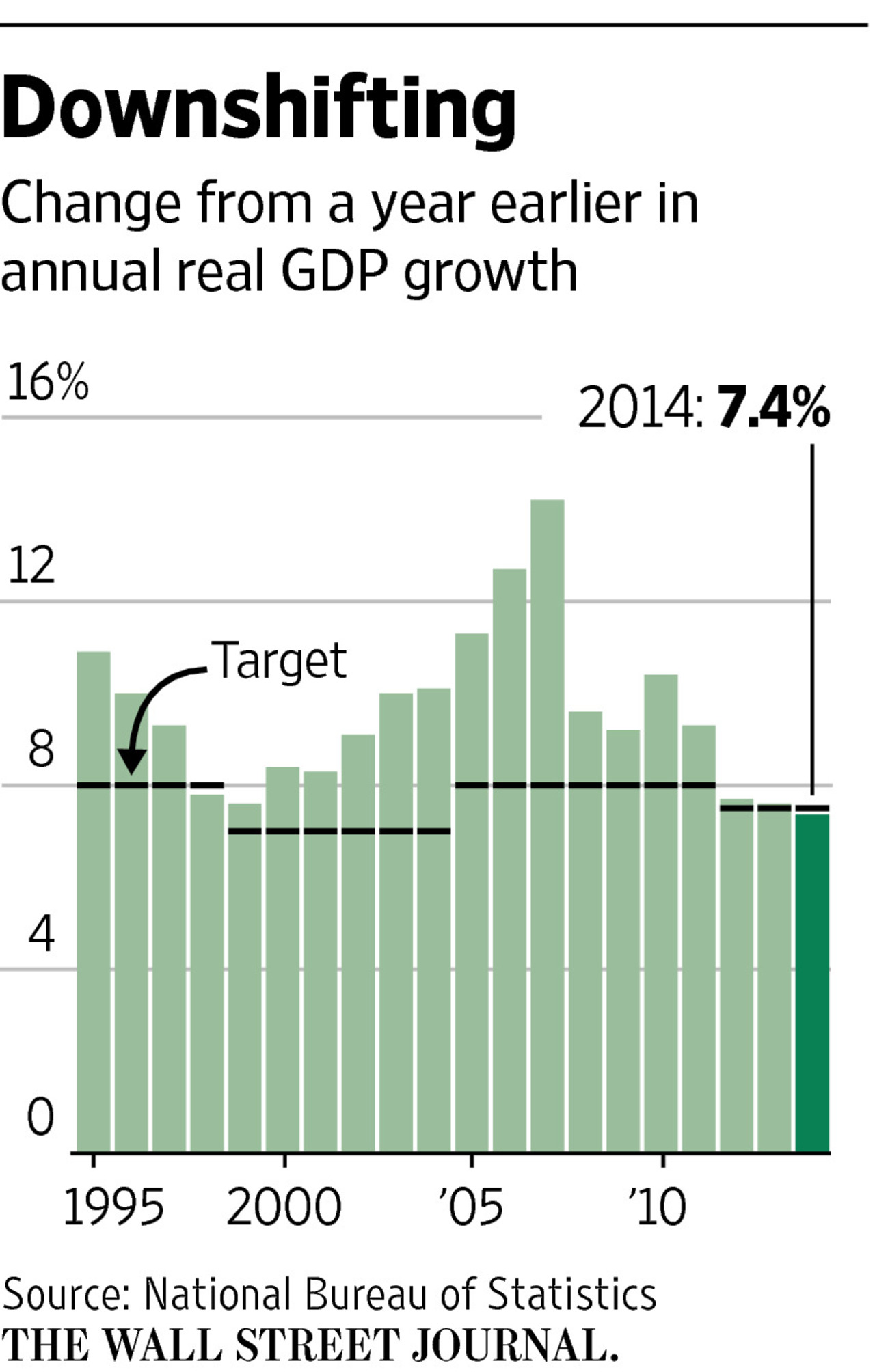 The recent slew of easing measures is “a clear reversal of what Zhou has long insisted on,” the central bank official said.

“The direct beneficiary of an interest-rate cut would be property developers and others with a heavy debt burden, such as local governments,” said Peng Junming, a former central-bank official who now runs an investment firm in Beijing, Junfan Investment Co. “Credit would remain very difficult to come by for small and private businesses even after the rate cut.”

China’s real-estate market—which together with its associated industries like construction and furniture, contributes about a quarter of the country’s GDP–has been in the doldrums for more than two years.

Prices of new homes fell in February compared with the month before, reversing gains recorded in January as demand for homes decline during the Lunar New Year holiday. On an annual basis, average new-home prices fell 3.8% in February, a steeper decline compared with the 3.1% fall in January and the 2.7% drop in December, according to data provider China Real Estate Index System.

The property-market’s troubles are in part due to a housing glut fed by developers taking on too much debt, and many developers are finding it hard to raise funds to complete projects. In Guangrao, a dusty industrial town in eastern Shandong province, a big housing project near a newly-developed industrial park sits abandoned after banks cut off its funding. “We’re trying to get the government involved to get our money back,” said Guo Xiang, a business owner in Guangrao who prepaid for an apartment in the half-built complex, which is ringed by empty roads.

The question now is whether Chinese consumers and companies will take advantage of the latest rate cut or hold fast amid further signs of slowing growth. Many economists and businesses have said that the weak economy—rather than financing—appears to be the biggest challenge. In a survey of 2,006 industrial firms, more than a third reported that supply exceeded demand for their products domestically and internationally during the fourth quarter while only 4% said they obtained new loans.

“As weak demand is the key problem injecting liquidity through loosening monetary policy cannot revive the industrial economy,” said the survey, which was released in February and conducted by Gan Jie, an economist with the Cheung Kong Graduate School of Business in Hong Kong and Beijing.

Several indicators from January including factory production and activity in the services sector suggested that the weakness is continuing. Capital outflows are also increasing, which is squeezing the amount of liquidity in the country’s financial system.

Meanwhile, deflation is looming. Prices at the factory gate have fallen for about three years due to dropping commodity prices and persistent overcapacity problems in a wide range of industries including steel, cement and glass. Consumer prices, at the same time, rose at the slowest pace in more than five years in January.

China is dangerously close to “slipping into deflation,” a newspaper owned by the central bank, Financial News, warned last week.

Write to Lingling Wei at lingling.wei@wsj.com